Word, as in The

Verily, for I say unto thee, go here and read.

One of the greatest gifts the Corps has given me is the ability to determine the potential FAIL of others rather than learning by my own failage. Granted, this is a rather easy example, doesn't take much to figure out which way this one is going to go, but it did make me chuckle.
Helpful suggestions for teh internets:

Sure there are more suggestions, but I've not finished reading the over 100 pages of peanut gallery color commentary.

ETA: read Page 1 for the the set up, then Page 2 for her response. After that, it appears to all be icing on the cake, especially when the douchnozzle keeps responding...

Been thinking about political asshattery in general, and a few politicians in specific. I try not to dwell on things too much, 'cause, well, there's only just so much bs that I find I can stand, nowadays. I thought it was interesting when my chain of thought took a different track, of sorts.


It started with Georgia's finest, opining on the possibility of military folks decidin' to up and go Guam tippin'...


Bounced around a bit, and then landed on another 'Call me Senator' who apparently got their panties in a bunch in re: the grievous insult of being called, "Ma'am". (Loved how she didn't address him as General during that little exchange, that was the topping on the cake!)


After some twists and turns, my little train wound up on sections of just about every General Petraeus clip that I've heard...


What's the connection, you ask? Political asshattery? Well, yes, but more so than that, was, the bearing of the Admirals and Generals when they have to deal with politicians.

Now, I've done my fair share of pissin' and moanin' about the really-really higher ups, but for the most part, it was more about them than directly because of them. Gettin' to formations 5 hours prior, hand scrubbing an already friggin' immaculate floor in a back room of the out-of-the-way berthing area on ship because the Division's CG is visiting in the same port as us, running fake personal security details / low-tech mine sweeping ops in Iraq, that sort of thing.

I've had to directly, face to face deal with stupid (much lower ranking) Officer questions, but truth be told, they were long and few in between, and for the most part, I'd give 'em credit; they didn't know something, so instead of pretending to be totally on the ball they put it out there and asked someone who did know what was going on. Good on 'em, sorta.

But what struck my mind when thinking about these incidents, and what I'm probably going to keep a look out for in the future is, their bearing. In all of the above mentioned scenes, there was no scoffing, snorting, wtf-ing, laughing, mouth-dropping, or hell, any kind of reaction other than the 100% professional response.

Is there some sort of Command-Staff College Poker class for advanced players going on out there? Holy Hey Zeus, can you imagine if the military got tired of the BS and just informed everyone that any and all future hearings would be responded by Gunny Ermey? Now there's a show I'd like to watch...!

Labels: In the News 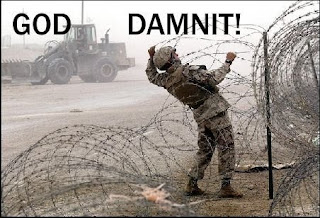 Well, not really, but y'all already knew that.

See, what had happened was that families, doing what they do, tend to expand with the additions of new little ones. A particular little one, curious and with a mischievous monkey-like climbing abilities, managed to apparently to defeat the eagle eye of his mommy, hump up a set of stairs, and either did a max set of pull-ups on the fancy bed blanket thing or directly onto the bedside hooya where I kept my laptop.

Seems to me that HP make a pretty good laptop, as it was fairly old, and considering who used it (moi), you can bet it was pretty much the definition of used hard and put up wet.

It was not, apparently, drop proof.

I thought it was a cute touch, however, when My Love had placed the laptop back on my bedside thingy (table? dresser?), with the power cable's new jaunty 45 degree angle connection to the laptop, and all but completely recessed into the body of the laptop.

Yeah, it was kaput. Would've cost more to fix it than it was worth, all my pics were duped onto the pc and on disc... so, yeah, it's sitting up on my closet shelf, perhaps waiting for a final use at the range, one of these days...

You might be pleased to know that while I declined to mete out any punishment due to the young age of the offender (under 3), not even researching local and country-wide orphanages, I have started a runing countdown, all for the momma's sake, of course, of when that little booger turns of legal age to be sent away to Marine boot camp.

Internet access has been apparently noticeably sporadic since, but hopefully, not too much longer.
Posted by Murphy at 11:07 PM 15 comments:

Labels: Gnashing of Teeth, Just For Me

For your viewing pleasure... click and marvel at the dainty tinkle of this zoomie's sterling silver set o' balls!

n.b. Grunts may want to put down any and all beverages before watching the video. Seriously, I think I damn near literally busted my gut.
Posted by Murphy at 8:32 AM 12 comments: